Christine Elizabeth (Anderson) Moser was born and raised in New Britain, Connecticut. She moved to Rocky Hill at the age of 22 to teach elementary school for 20 years. She taught 5th grade at Moser School. Chris was well known and respected for her civic-mindedness and volunteerism. After retiring from teaching she devoted herself tirelessly to community affairs. In 1991 the Hartford Courant profiled her life in volunteerism. She was quoted as saying “I feel strongly that one of the reasons we were put on earth is to make the place a little better.” She believed that everyone has an obligation to do some volunteer work.

“There’s something out there for everyone. You don’t have to be a part of organized volunteerism. You can help someone that needs help. The seed of volunteerism can be taking out an elderly lady’s trash can. It can start on a very individual basis — doing whatever you can do.” Christine lived her philosophy. She was active in Rocky Hill Congregational Church as a deacon, and as a member of the Stepney Bell Choir. She volunteered at Hartford Hospital, Connecticut Public Television and Salvation Army. She was a Friend of Dinosaur Park, a life member of the Rocky Historical Society and active in the Republican Party.

Chris loved books and her love of reading led her to perhaps her most passionate interest: the Cora J Belden Library. She played a leading role in the growth and development of the library, and in efforts to expand, upgrade and modernize it. She served on and at the time of her death chaired the library board of directors. An editorial in the Courant at the time of her death stated that “Christine A. Moser was a friend not only of Rocky Hill’s Cora J. Belden Library but of everyone who likes books, who likes to read.” In a related article, “Every patron of the Cora J. Belden Library owes a debt of gratitude to Christine.” 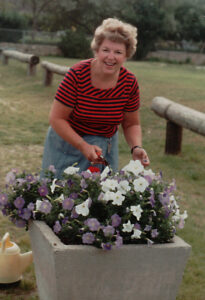